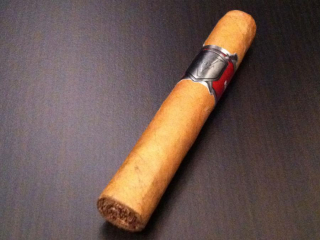 The Veritas Connecticut construction is pretty good, however I had some minor complaints the first: the cap is a little sloppy and the second: left over glue on the wrapper. I do like the label which is pretty simple but classy. So with the little research I was able to find, I found out they draw test all their cigars which made me want to use the Wolf v-cutter on this stick. After cutting and lighting it I found the draw to be a little tight which may mean it needs a traditional cut.

The flavor notes at first were: mild pepper, mild hint of cedar and a bit of sweetness. The burn was wavy, with the smoke aroma being a sweet woody smell.

The flavor notes order changed a bit and were: sugary ,light cedar and light pepper. The burn started to even out, with the smoke aroma having a woody, mild ammonia smell.

The flavor notes order again changed a bit and were: medium pepper, bit of sweetness and hints of cedar. The burn almost evened out completely but not quite there. Unfortunately with about an inch left the Veritas got harsh and it seemed the nicotine levels bumped up a bit with my heart starting to race.

For me the first and second third of the Veritas was pretty enjoyable with light to medium nicotine levels and pretty well balanced flavors. The final third to me was a let down in that the strength kept rising and then getting harsh to the point where I had to put it out. While I am not really a Connecticut fan, if this cigar does end up in the $5-$6 range I would buy it even with a bad ending.  As for everyone else if you are a Connecticut fan this may be a good cigar for you to check out and would be interested in how this cigar ends for you.

Sorry the pictures are a little fuzzy I tried to take a shortcut and took them with my camera phone.